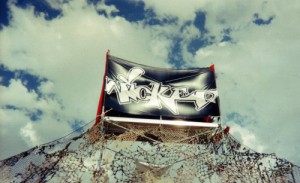 In  August of 2017 Wicked Sound System celebrated the relaunch of Wicked Records, with the annual shindig.

For over 25 years, Wicked has steered a course for underground dance music whose influence can still be felt today in the myriad of festivals. The crew’s legendary Full Moon parties formed the foundation for the west coast’s sound system/outdoor party culture.

The DJ crew of Jenö, Garth, Markie and Thomas went on to spread their gospel throughout America in a customized 1947 Greyhound bus with their own 15k TurboSound system and a crew of 20 friends. This inspired Garth’s record label Grayhound Recordings which became home base for the crew’s own releases and launched the recording careers of many other west coast electronic artists. 53 singles were released from 1998.

Now back to the beginning…

In the spring of 1991, a small brave crew of Acid House seekers set sail from southeast England in search of adventure. San Francisco was the destination.

They made their mark under the Golden Gate Bridge at Baker Beach with the first in a 6 year run of wild and lawless full moon parties.

In a haze of psychedelic smoke the crew came up with a name. Wicked was born and consummated the following weekend with an all-night loft party above BPM Records in the city’s sex district.

From here they moved below ground to Jesse Street, a sweaty after-hours jam that became the crew’s first weekly residency. Kick-off was 2am!

Quickly outgrowing the tight confines of the basement, Wicked threw a series of warehouse parties before settling into the King Street Garage with their own custom-designed Turbosound system and camouflage netting.

Wicked was the pioneering sound system at Burning Man in 1995. The same speakers went on to rule the late-night airwaves each year at Reggae on the River with guest appearances on the mic by Reggae legends Mikey Dread and Junior Reid.

By now, word of Wicked had spread across the states. After a couple of years touring in a convoy of vans the crew teamed up with friends in Berkeley and all aboard Clay’s customized ’47 Greyhound bus took the country by storm.

After a 13 year run as the city’s reigning sound system, Wicked disbanded in 2004, although Garth & Jeno kept the flames alive with their Acid Disco Back2Back parties.

Garth has taken up film acting in Los Angeles. His silver screen debut was in ‘Speed Dragon’ which won best feature at NY Independent Film Festival, with many more in the works.

Markie has worked his way up to Head of Science at San Francisco’s School of the Arts.

This website uses cookies to improve your experience while you navigate through the website. Out of these cookies, the cookies that are categorized as necessary are stored on your browser as they are essential for the working of basic functionalities of the website. We also use third-party cookies that help us analyze and understand how you use this website. These cookies will be stored in your browser only with your consent. You also have the option to opt-out of these cookies. But opting out of some of these cookies may have an effect on your browsing experience.
Necessary Always Enabled
Necessary cookies are absolutely essential for the website to function properly. This category only includes cookies that ensures basic functionalities and security features of the website. These cookies do not store any personal information.
Non-necessary
Any cookies that may not be particularly necessary for the website to function and is used specifically to collect user personal data via analytics, ads, other embedded contents are termed as non-necessary cookies. It is mandatory to procure user consent prior to running these cookies on your website.
SAVE & ACCEPT